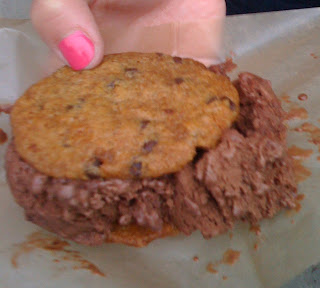 Stogo is a newly opened venture in the east village, founded by Kyra Sedgwick’s brother Rob Sedgwick. All of the ice cream is made in house and are not exclusively one formula. Some of the flavors are coconut based, some are soy based and some are hemp based, which is a great option for those with nut/soy allergies.. All of the flavors were very enticing and the server allowed us to try as many as we wanted. I loved how they were displayed; it reminded me of a gelateria in Rome! They also offer soft-serve but I think the only flavors available are vanilla & chocolate which is kinda boring considering all the great flavors that were not soft-serve. Some of my faves were the Toasted Almond Joy (with coconut shavings on top!), Mexican Spiced Chocolate (spicy!), Pomegranate Chocolate Chip and Coffee. I decided upon the Chocolate Hazelnut (with pieces of hazelnut on top!) because Chocolate & Hazelnut are possibly my two favorite flavors ever and combining them sounded like bliss.

I was so stoked when I realized that not only would I be able to enjoy this ice cream in a cup or a cone, but there also was an option of putting it between two cookies from babycakes and enjoying a chipwich! Aw man. Of course that’s what I went for. It was super messy but so good! The ice cream was terrific, kind of melty but very smooth & creamy. The flavor was amazing and spot-on. My non-vegan friends were very impressed, they didn’t think they would be able to tell it was vegan if they didn’t know beforehand.

The place itself was kind of small and had little seating so we opted to eat outside. Its definitely more of a place to get ice cream and go, which kind of sucks because the ice cream does melt fast and get messy. However, its so good you’ll probably finish it pretty quick!

Stogo also offers babycakes cupcakes & a variety of vegan chocolate & chocolate truffles which is a great alternative for those who aren’t in the mood for ice cream.

So on to Bonobos. While I might be able to compare Stogo’s ice cream to gelato, Bonobo’s ice cream is more like sorbet. I’m not quite sure why they call it “ice cream” anyway when it lacks that creaminess, but fine, went for it anyway. This place touts itself for it’s healthy food, which consists mostly of salads and raw veggie patties. It’s probably a great place for lunch because they have quite a selection. As for the ice cream, they seem to have 4 flavors every day which vary. All of the flavors are really fun and different and the server let’s you try as many as you’d like as well! When I visited the flavors available that I tried were Durian (GROSS but so cool that they have this!!), Banana Pudding (really on point and had a subtle cinnamon flavor) and Mango Banana Pineapple (very sweet and yummy). All their “ice creams” contain no table salt nor added sugar, no soy or dairy. In other words, its pretty much like a really healthy sorbet or frozen pudding. I decided to have the Mango Banana Pineapple which was definitely icey but also pretty tasty and cold. You’re not going to find indulgent flavors like chocolate hazelnut here but it’s great as a refreshing treat on a hot summer day. The only bummer is that there is only one size cup option and no cones. I like having options!

Anyway, next installation coming soon, any suggestions of where I should go? Have you been to Stogo/Bonobos? What’s your take? Post in the comments!