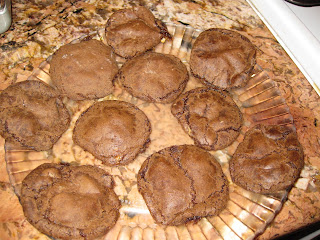 I like easy, quick recipes. This is why I often bake cupcakes. Baking cookies never seems to work for me and I hate when the recipe calls for egg replacer. That stuff never turns out the way I want it to. I’m a spaz and probably not meant to be in the kitchen but I love baking. Anyway. Isa Chandra Moskowitz of Vegan Omnicon, Vegan with Avengance, Vegan Cupcakes Take Over the World and the newly released Vegan Brunch posted a recipe for Chocolate Peanut Butter Pillows (cookies) on her blog the Post-Punk Kitchen. They looked soo easy so I decided to go for it, and make it a fun girls hang out. The ingredient list was fairly simple, no egg replacer. The one thing we couldn’t get at the super market was soy creamer, so we just got almond milk and winged it. The recipe didn’t require any food processor which was rad. All we needed to do for both the filling and dough was combine ingredients and mix. It took 10 minutes to prepare. The only issue was that the peanut butter filling was really watery. I think it may had to do with the lack of soy creamer? Not sure. So we added a ton of confectioner’s sugar to make up for it and it still wasn't rolling the way it said it would in the recipe. The filling did not work at all. It tasted awesome, but we kind of knew we weren't going to get those pillows. We did our best and put it in the oven.

The end result – a really mushy soft chocolate cookie with a super sweet peanut butter filling. It wasn’t a pillow but, works for me! I love cookies. We ate the majority of these in like 10 minutes. So the whole process of baking & eating was 30 minutes total. These cookies were super rich and chocolate-y so I definitely needed water to wash them down and I think we all would have been more satisfied if they were fluffier but the flavors were still there.

We went out drinking later that night and I put the leftover cookies in my bag. It was a pretty awesome 2am snack as well. My friends had some great suggestions on how we can work out this recipe to our liking (ie: baking for longer – they were definitely undercooked, fixing the Peanut Butter filling’s consistency) so I have a feeling we will be making these more. It’s just so easy and tasty that it’s hard not to!