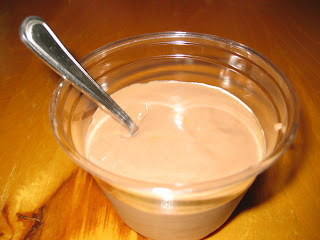 There's this restaurant in the Lower East Side called SOY. It's kind of cute and really cheap, however not 100% vegan, though there are some tofu-heavy vegan options. Their vegan dessert options consisted of 4 flavors of "I can't believe it's not tofu" soy pudding - red bean, green tea, vanilla and chocolate. I went with the chocolate, of course. It was $4, which I found to be kind of pricey for the amount of pudding I was served. I also wasn't too happy with this pudding. It tasted like chalk. The chocolate flavor was too bitter and lacked the sweet. The consistency was kind of strange too, reminded me of that Kozy Shack pudding I tested previously. It had a weird layer of film on top. I mean it was ok, I ate most of it, but I'd rather eat zensoy chocolate pudding.
Tags: chocolate, kozy shack, new york city, pudding, SOY, taste test, zensoy