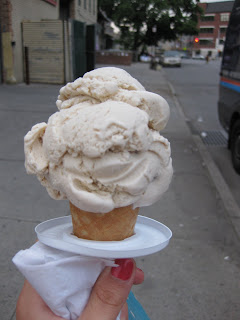 I have came, seen and conquered Vegan Ice Cream in New York City. I finally made it to the mysterious and much talked about Klein’s. I went to Kyotofu on a day other than on Monday, when they are closed. I have experienced great happiness upon tasting and great sadness when the cone/serving cup is empty. AND now, I present to you the final installment of the YUMMIEST place to get Vegan Ice Cream in New York City.

Klein’s is a kosher ice cream shop located in Borough Park, Brooklyn which has a heavy population of Orthodox and Hasidic Jews. Those who are kosher do not mix meat and dairy and do not eat dairy up to 6 hours after meat has been consumed. Therefore, Kosher companies often make products that are dairy-free. These products are not always vegan, but those companies that are smart make it a point to have it certified vegan so that their available consumer market can increase. This is why one will see that many vegan products & restaurants are kosher as well.

Anyway this shop rules. The place is small and doesn’t have seating but this is because the walls are lined with freezers that are packed to the brim with ice cream products, many of which are vegan. You can browse through the non-dairy section of their site to get a taste of what’s available. Two things that really stuck out was vegan bon-bons and a vegan version of chocolate éclairs ice cream bars (much like the ones from the good humor truck!).

The case in the front was full of ice cream, one section of dairy and one of non-dairy. They had some interesting vegan flavors such as cherry vanilla, coffee royale and butter pecan. The friendly server let us try as much as we wanted to. They also had vegan soft-serve – chocolate vanilla twist and soft-serve sorbet. I ended up going for the butter pecan because I have not seen that flavor anywhere. What really made my mouth drop was that a single scoop cone was, get this, $2.75. I riddle you not. The cone was packed with ice cream. This was quite a hefty single scoop. This ice cream was great. It tasted so good. I was really pleasantly surprised with how creamy the consistency was and the flavor was spot on. The pecans inside were fresh and crunchy.

Then I took those chocolate éclair bars home. This provided joy for the rest of the week. According to my memory, they tasted almost exactly what the good humor bars tasted like. The crunchy cookies over a hard chocolate shell outside, the creamy vanilla layered on top of a chocolate center inside. Soooo good.

I really liked the ambience of Kyotofu. This place was really cute inside and the server was very accommodating and friendly. This place mostly serves fancy drinks, Japanese dinner plates and non-vegan bakery goods all with a focus on their namesake, tofu. However, they have finally pleased vegans by offering 2 vegan soymilk soft-serve ice cream flavors that rotate weekly. Some examples of flavors are white sesame, matcha green tea, hazelnut and Kyoto miso. When I went the flavors available was Kinako (Soybean flour) and Chocolate. There were no cones (boo!) but we did get one free topping (yay!). I ended up getting the a twist of the Kinako and the Chocolate with a berry compote topping in a large serving bowl (which was very large) for $6.34. My non-vegan friend said that she wouldn’t have known that this soft-serve was vegan. She thinks its as close as you can get to the real thing. I thought it was very smooth and creamy. Really thick unlike most soymilk ice cream that is kind of icey or watery. The kinako tasted like a sour peanut butter and the chocolate was sweeter than I expected. The mix of the two with the berry compote was very good. I really enjoyed.

So where is the yummiest place to get Vegan Ice Cream in New York City?! It’s a tie! Klein’s definitely has the biggest bang for your buck including plenty of frozen treats to take home. However, Lula’s takes the gold for most inventive offerings, flavors and cutest shop ever. It is a must that you go to both of these places this summer, several times.