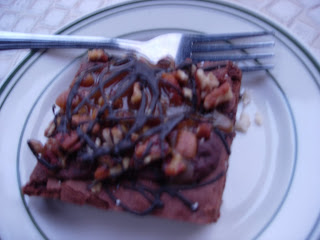 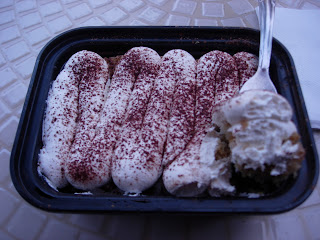 This vegan brownie was awesome. My friend (who wanted a brownie) asked which of the vegan treats selection she should get (this was at atlas café) and she recommended the “turtle”. I prefer a dense fudgey brownie and this was just that. It was super chocolately and the pecans and caramel on top were amazing. After my friend finished, she wished there were more, as did I. I haven’t had as good of a vegan brownie from any other bakery.

I don’t see vegan tiramisu around too often, so I was really stoked to try this one from Vegan Treats. The espresso flavor was strong and the “mascarpone” was super creamy and awesome. However, the cake itself lacked a little. I always thought tiramisu had lady fingers on the bottom but it seemed like I was just eating sponge cake. It was definitely enjoyable and since I’ve only had vegan tiramisu once or twice, I’m glad it’s around. I can imagine that tiramisu is kind of tough to make – it’s not just a “replace this here and replace that there” type of thing. However, I think it would have been more impressed if I tasted lady fingers in the consistency.

Have you had vegan tiramisu? Made it yourself? How about vegan treats brownies? Where's your favorite place to get a brownie? Post in the comments!