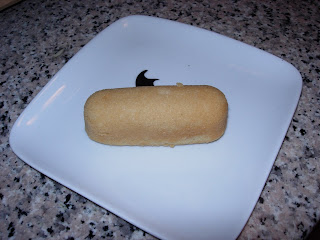 Dolce Vegan Twinkies
RATING:YYYY(4 out of 5 hearts!)
Dolce Vegan Bakery is a bakery in Atlanta, GA that makes organic baked goods such as brownie bites, cinnamon buns and TWINKIES! Though they don't have a shop (plans for one to open this summer), their goods are available at a handful of stores in Atlanta and can be ordered online from Cosmos Vegan Shoppe. I ordered mine and it arrived within two days of shipping, though there was a warning about how it should be enjoyed quickly while its still fresh.
So, naturally, I opened them right away. I was really suprised at how much they resembled twinkies! To be honest, I don't really remember what twinkies taste like so I don't know if I can do an honest comparison here. However, it was seriously tasty. The texture was moist and fluffy. The cream filling was great, though I would have liked there to be a little more of it. The cake itself had a great vanilla flavor. I really loved this. The package came with two twinkies and though I only expected to taste one, I immediately ate the second! It was that good.
Have you had twinkies from Dolce Vegan? Or any other products for that matter? Have you had vegan twinkies from another bakery? Post in the comments!
Tags: atlanta, cosmos vegan shoppe, dolce vegan, taste test, twinkies