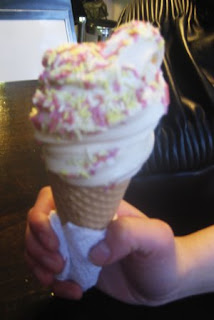 My favorite warm weather treat is most certainly ice cream. And with the warm weather slowly creeping in to New York city, I decided I must locate my favorite spots to get ice cream and divulge to you all. This past weekend I was able to stop by two different places… Lula’s Sweet Apothecary (I know, I know, I already wrote about them) and PennyLicks in Williamsburg, Brooklyn.

Though both of these places have an “old-school-soda-shop” feel, they are very distinctly different. Lula’s makes their own mostly-nut based ice cream and offers a variety of vegan brownies, sweets and candies that are not widely distributed throughout the city. Pennylick’s serves temptation ice cream from Chicago soy dairy and cakes/cookies/cupcakes etc from Vegan Treats bakery, which is available all throughout nyc. Lula’s is also 100% vegan while Pennylicks has a selection of non-vegan ice creams and baked goods. They also might serve to you in a non-vegan cone if you don’t ask.

So let me get into my two experiences, first I went to Lulas to try their Cake Batter Soft-serve. This was my first time having vegan soft-serve ice cream ever or any soft-serve ice cream In 4 years. I mean, ok, I have had atlas soft-serve but that crap is gross! (I still ate it weekly last summer anyway but let’s not get into that). This actually held it’s ground! My two non-vegan friends couldn’t believe it was vegan… it didn’t melt like crazy. It actually hung out on my cone and looked gorgeous. AND the taste! You know I love cake batter. It was amazing, smooth and creamy. I think getting their soft serve will have to be a weekly ritual. They rotate their flavors but when I was there they had cake batter and chocolate soft-serve. My friends and I sat at the counter and enjoyed our meal while good music played and the other customers ranted and raved about how much they loved their ice cream too (I think they were all non-vegan). Before we ordered we sampled everything, it's almost mandatory to try all the new flavors and the owner welcomes it. As soon as someone walks in, she pulls out the taster spoons! So cute.

The next day, I went to Penny Licks. I love temptation ice cream so I couldn’t wait to get my hands on some. I really wanted the coffee flavor, which I had at the shop when I went last summer. The list of vegan flavors are displayed on the ice cream case which is where you order. There was a couple ordering and blocking the case so I couldn’t see the flavors. I was kind of set on coffee anyway. When I finally got to see and was asked to order, coffee was not listed… I thought maybe it just wasn’t noted so I asked the server just to make sure. She was very rude to me and when I chose a flavor she didn’t even ask me cone or cup or type of cone. She just grabbed a cone and started scooping! I was slightly appalled. When I went to go pay there was a huge sign about how it is rude to be on your cell phone while paying for your ice cream. Meanwhile, I look over and my bitchy server is now chatting on her cell phone while serving a dad and his two little kids! Aw man, it ruined the whole ice cream experience. The ice cream was awesome! I have to say strawberry temptation is pretty amazing and creamy! However, I’m pretty sure I won’t go back there again. I’ll just have to buy temptation and make my own ice cream cones.

Have you been to Lula's or Penny Licks? What were your experiences? Where else should I go to find the yummiest vegan ice cream shop in NYC? Post in the comments!!