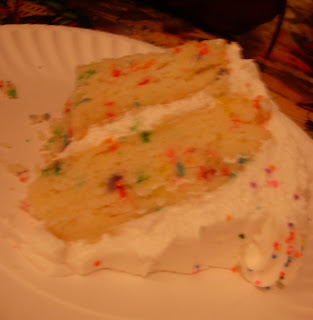 Foodswings is a cute “fast-food” style vegan joint in Williamsburg BK. It used to be owned by fellow Staten-Islanders Freedom & Lee Poerio-Tripodi but a few months back he sold it to the owners of the metal/grind-core bar Lucky 13 (which has vegan White Russians!). I haven’t been in since but I figured I should check it out to see if the dessert options have changed. With the previous owners they had an amazing selection of shakes, a nice vegan candy/ice cream selection and whoopee pies/brownies/cakes supplied by Vegan Treats . I would mainly go for their shakes which were always out of this world. The Bella Vegan was my favorite – vanilla ice cream, cookies and peanut butter.

When I walked in I noticed it from a mile away.... a vegan funfetti cake? WHAT YES! Totally my favorite cake ever and I've never seen it vegan. Man when I was 15 I would bake one funfetti cake a week. Haven't had that in forever!! It looked amazing in the case.

But alas, it wasn't good. Very dry and boring. No flavor what-so-ever. The frosting was pretty rad, sweet and well-whipped. Disappointing altogether though.

Anyway, despite the management change the laundry list of awesome shakes is still available so I had the bella vegan and it was terrific. Lots of peanut butter, super thick and yummy. I would not be opposed to going there only for shakes all the time.

So overall, shake good, cake not so much but I'm hoping that it's because it was stale and old. Which still, shouldn't be sold to customers in that fashion but whatever. I'll try it on a different day of the week and report back.

What do you think of the new FoodSwings? Have you been? What's your favorite shake?