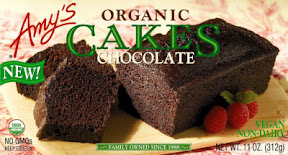 Amy's Organic has released a new line of frozen cakes. There are only two flavors, chocolate & orange. Since I'm a sweet freak, I got the chocolate.

Ok so I took it out of my freezer and read the directions - it said to defrost for 2.5 hours! I was like.. what I want cake now!!!!!!!!!!! Then I put it in the fridge. Then I forgot about it. Now its two days later and I take it out of the fridge. So it says on the box that if desired it can be heated up in the microwave but it does not indicate for how long. I gave 30 seconds a shot and it came out smoking.

It looks super thick and rich so I was nervous it would be dry & heavy. When I took my first bite I was pleasantly surprised. It was very moist and light. It had a great chocolate taste that wasn't too overwhelming. Did I go back for seconds? Yes, come on look at that tiny slice I cut myself! It was not as moist & yummy un-heated but I still wolfed it down.

What I really liked was how its loaf style. It's a great serving size, I don't feel weird buying it like I would if I bought an entire peanut butter bomb cake or something. It's like a cute little loaf of chocolate cake.

Have any of you tried this or the Orange cake? Posts thoughts in comments!! 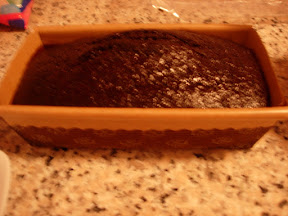 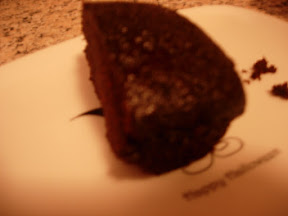